Hajipur is located in the northern region of Bihar state and is budding as a sub metropolitan locale near the state capital Patna. It is a municipality and administrative headquarters of Vaishali district of Bihar ever since it’s partition from Muzaffarpur in the year 1972 . Hajipur is located 10 kms from Patna, the capital city of Bihar transversely on the sacred river Ganges and is budding as one of the foremost profit-making and manufacturing region of the state. It is headquarter of Eastern Central Railway zone. 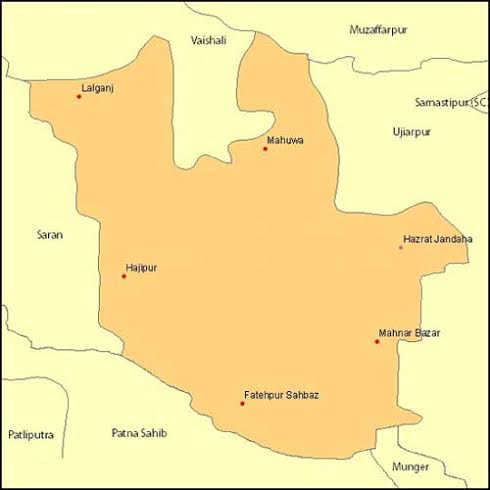 Hajipur coordinates at 25 degrees 68 minutes North and 85 degrees 22 minutes East and has an average altitude of 46 metres (150 ft) above sea level. The Hajipur town is circumscribed by Narayani Gandak River in the west and sanctified Ganga in the south, providing scope for additional development in east and north course only. The city has an awfully superior rail network, road and water transportation subsist in the town linking it with further regions of the district besides state and country. Mahatma Gandhi Setu Bridge built over river Ganga connects it with Patna, the state capital while one more rail and road bridge over Gandak unites it with Sonepur, which is the headquarter of a railway sub-division under Eastern Central Railway. Hajipur is the biggest town of Vaishali district equally in requisites of region and inhabitants. Hajipur is 11th leading city and 15th most heavily populated city of the State.

The climate is humid and moderate in Hajipur. In winter weather temperature ranges from 16°C to 4°C where as in the summer, the temperature climbs up to 40°C. The typical annual temperature in the city is 25.8 °C. The relative humidity is at its least during April and May and highest in the months of July and August. It varies between 60 to 90%. The average yearly rainfall in the city is 1168 mm. The city receives about 85% of the total rainfall from south-west downpour. The south west monsoon widens from the mid of June to end of September. The region gets 50% of the rainfall from July to August month of the year. The hottest month of the year is May with a normal temperature of 32.2 °C. In January, the usual temperature is 17.1 °C. It is the lowest average temperature of the complete year. The disparity in rainfall between the driest and the wettest month is 263 mm. The average temperatures diverge during the year by 15.1 °C.

The Ganga, the biggest and the sacred river forms the natural boundary for the city. The Ganga receives the Great Gandak a little below Hajipur and confluence of two rivers can be seen from Mahatma Gandhi Setu. The river widens during the rainy season and the city is termed to have the highly fertile soil favorable for agriculture. The Gandak flows from Nepal and travels long the Muzaffarpur bank in Hajipur. There is a Nepal Mandir build along the bank of the river Gandak. This river joins the river Ganga in Hajipur. There is a bridge over the river Gandak connecting Sonpur.

As of 2001 census, Hajipur with a population 147,126 was 15th most heavily populated city of the State. Out of which males were 78,561 and females were 68,565. The literacy rate was 79.26 percent, elevated than the countrywide average of 74.04 percent with the male literacy being 84.78 percent and female literacy being 72.93 percent. In the past decade the city has seen a steady increase in the population and the literacy rate being far above the nation wide average.